The Year of Pluto (NASA Video) 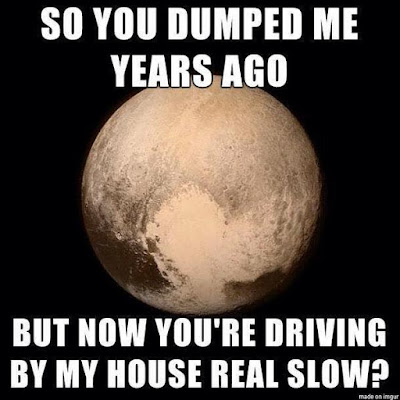 Video of the Martian Jelly Donut that Mysteriously "Appeared" for the Opportunity Rover.

This is the biggest space story of the year simply because of the instant raising of awareness it engendered, even in the most non-scientific communities, that we (and our planet) are part of a much larger and very active existence.

"The Chelyabinsk airburst was the largest since Tunguska in 1908, but unlike that and other historic events, the strike was recorded by a full suite of modern technology: satellites photographed the meteor, security and personal video cameras filmed the path across the sky, and sensors picked up infrasound waves as lumps hit the ground..."
Posted by AVN Staff at 5:30 AM No comments:

Visualization video of the Sun's magnetic field having reversed its polarity, the "midpoint" of Solar Cycle 24

Details of the Spacewalks the Expedition 38 Crew will Conduct to Repair the International Space Station.


"Lead U.S. Spacewalk Officer Allison Bolinger discusses the details of the three spacewalks the Expedition 38 crew will conduct to replace a faulty pump module on the International Space Station. Flight Engineers Rick Mastracchio and Mike Hopkins will venture out of the station's Quest airlock on Dec. 21, 23 and 25 to remove a pump module that has a failed valve and replace it with an existing spare that is stored on an external stowage platform. The pump is associated with one of the station's two external cooling loops, which circulate ammonia outside the station to keep both internal and external equipment cool. "
Posted by AVN Staff at 11:51 AM 1 comment:

The Japanese Robot, the Astronaut, and Santa Clause (Video)

The world's first robot astronaut has begun chatting to the Japanese commander of the International Space Station.